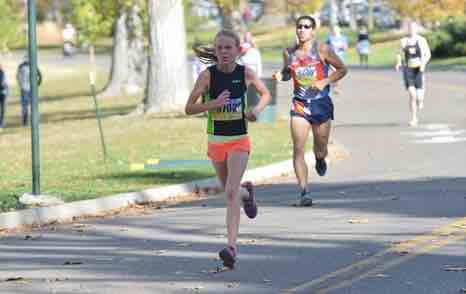 Lanie’s mom, Caroline Szuch, suffered a placenta abruption during her second trimester while pregnant with Lanie.  In this pregnancy problem, the placenta separates too early from the wall of the uterus, causing severe bleeding. The mother-to-be was told there was no way to correct the problem and put on bed rest and medications until her daughter was born in January 2004.

Seemingly healthy at birth, Lanie has had to overcome numerous medical challenges on her way to becoming a champion athlete.  Originally she was diagnosed with severe colic and failure to thrive, despite Caroline’s insistence that something else was wrong. Ultimately, an ultrasound revealed that Lanie had hydronephrosis and that one of her  kidneys was eight times larger than normal. She underwent surgery when she was just a few weeks old to straighten out her ureters.

When she was about six, Lanie began suffering from severe reflux, which her doctor attributed to emotional factors. She underwent an MRI, but the family never received the results.  The reflux continued for two years, and it was only after Caroline insisted on a second MRI that the Szuchs learned that a mass had been detected during the previous test.  Lanie underwent surgery again – this time to remove the benign mass and her cyst-covered gallbladder.

Lanie’s indomitable spirit helped her to overcome these medical challenges and ultimately become a top athlete, dominating the women’s field in running events at the 2016 Go Pro Mountain Games as a pre-teen and returning in 2017 to defend her title in the Superfest Aprés 5K trail run. This year, she was the fastest woman by more than one and a half minutes, racing up 1500-plus feet on Vail Mountain in just over 22 minutes.  Other notable performances include being the second-place finisher among women at the 2015 Xterra National Championship half marathon and seventh at the U.S. Mountain Running Championships in 2015, when she was only 11.

According to her mother, Lanie is inspired by runs that support a cause and share a message of hope. The Great Candy Run, presented by the Colorado Fetal Care Center, does just that by supporting the Fetal Health Foundation, which ultimately provides hope to expectant families.

Lonnie Somers, FHF founder, is thrilled that Lanie is participating again this year, stating, “She’s such an inspiration. Her accomplishments show that children can overcome serious medical conditions and achieve great things.” Lonnie went on to say that Lanie and her mom are fortunate, remarking, “Approximately 40,000 maternal deaths occur in the United States each year due to placenta abruption. And, while fetal death is not typical with this condition, a baby born pre-term has a greater chance for serious complications and morbidity. It’s recommended that mothers with this diagnosis receive care from a maternal fetal specialist.”

Caroline agrees, advising parents to “Be your own advocate.  Don’t give up if you are told there aren’t options. Keep searching until you find organizations like the Fetal Health Foundation that can direct you to the best medical solutions.”

About the Fetal Health Foundation and The Great Candy Run

Based in Littleton, the Fetal Health Foundation leads the way in supporting families and medical treatment centers dealing with intrauterine fetal syndromes.  The 501c3 nonprofit organization connects families diagnosed with a fetal condition to top-rated medical specialists and funds research to improve outcomes in fetal conditions. More information about the Fetal Health Foundation is available at www.fetalhealthfoundation.org.

The Great Candy Run series is the primary fundraiser for the Fetal Health Foundation and also serves to boost awareness of fetal condition diagnoses and provide a community of hope for families experiencing these medical challenges. Now in its 14th year, The Great Candy Run is the largest timed 5K in Colorado and has twice been named the “Best Kids Run” by Competitor magazine.